Playing the piano and violoncello from the age of seven, he studied music teaching at London University after his discharge from the Royal Navy. Later, he also obtained a degree in composition and orchestration at Trinity College of Music. In the 1960s, he was a cellist in string quartets whilst also playing jazz music in London’s club circuit.

More or less accidentally, he got involved in arranging pop music – and over time, he became one of London’s most sought-after string arrangers, working with the likes of Cat Stevens, Elton John, Charles Aznavour, Paul Simon, and Paul McCartney, and penning the scores to an endless list of classic pop tunes (‘Lady d'Arbanville’, ‘She’, ‘Morning has broken’, ‘I’ve got the music in me’, ‘Da ya think I’m sexy’, ‘Just when I needed you most’, ‘Goodbye yellow brick road’, etc. etc.). Over the years, he also did his fair share of musical conducting at London’s West End and elsewhere.

Following his participation as a conductor on behalf of Italy in the 1980 Eurovision Song Contest with Alan Sorrenti’s ‘Non so che darei’ (finishing sixth), he worked in Rome as a studio arranger and television conductor for the best part of three years. In the 1980s, Newman gradually withdrew from the studio business, instead focusing on music teaching, musical arranging, and, ultimately, composing. In October 2015, he received a Gold Badge Award from the British Academy of Songwriters, Composers, and Authors for his contribution to the music scene in the United Kingdom.

In the dozens of interviews I have done with musicians in the course of the last fifteen years, many mentioned him as the best arranger around in London in the 1970s and 1980s. Del Newman was 89 years old. Rest in peace!

PS - in due course, a more extensive overview of Del Newman's career will be published on www.andtheconductoris.eu. 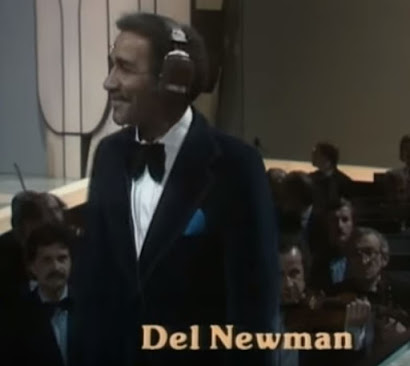 Email ThisBlogThis!Share to TwitterShare to FacebookShare to Pinterest
Labels: Obituary