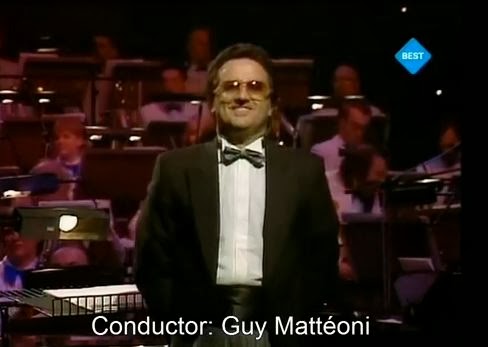 Pianist and arranger Guy Matteoni hails from . He was member of a pop group and had a short singing career himself. He was the assistant to movie composer Michel Magne and worked as an arranger in the recording studios, with various hits to his credit, such as ‘Dansez maintenant’ by Dave (1975) and ‘Elle’ by Didier Barbelivien (1980). All major hit records of Gérard Lenorman were arranged by Matteoni as well. He wrote the orchestration to the soundtrack of ‘Gwendoline’ (1984). In 1986, Mattéoni set up a recording studio with Claude Mainguy.


Guy Matteoni conducted three French Eurovision entries: ‘Je suis l’enfant-soleil’ by Anne-Marie David (1979), ‘Chanteur de charme’ by Gérard Lenorman (1988), and ‘J’ai volé la vie’ by Nathalie Pâque (1989). This last-mentioned song was composed by Matteoni himself; all songs had arrangements written by him. Mattéoni also orchestrated the 1978 Portuguese entry ‘Dai-li-dou’ and the 1983 French entry ‘Vivre’ – but these songs were conducted by Thilo Krassman and François Rauber respectively.
Click http://www.andtheconductoris.eu/index.htm?http://www.eurovisionartists.nl/conductor/dir020.asp?ID=198 for Guy's career overview and Eurovision memories.
Posted by W.B. Tukker at 08:49